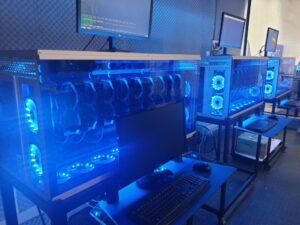 sustainable business. If more countries in Africa invest in energy infrastructure, this could push
the industry forward. In this article, we’ll explore solar energy, high electricity costs, and the
environment’s impact. These are all challenges that may prevent Africa from becoming the next
bitcoin mining hub. But with the right energy infrastructure investment, it’s possible for Africa to
become a hub for Bitcoin mining.

There are several solar projects underway in Africa. The largest one, the 800MW Noor Midelt
solar complex, has been funded by the World Bank, African Development Bank, and European
Investment. In addition, Seychelles is planning to build Africa’s first floating solar project,
aimed at generating 5,8 GWh per year. Meanwhile, solar farms have also been erected in
Uganda, Kenya, and Burkina Faso.
Another solar energy project in Zimbabwe is the Sun Exchange, which crowdsources funds to
purchase photo-voltaic cells from local farmers and leases them back to investors. The solar
panels are paid off over 20 years in Bitcoin, and about 60% of investors choose to receive their
payments in the cryptocurrency. The South African startup also plans to expand to other
countries in Africa and has raised $1.4 million in crowdsourcing, the largest amount ever raised
by a crowd-funding project in Africa.

One of the major drawbacks to Bitcoin mining in Africa is high electricity costs. Electricity costs
vary widely across different countries depending on their access to natural resources and
government subsidies. Mining hardware requires high amounts of electricity. A typical Bitcoin
miner drains roughly 1350 Watts of electricity when it is working, equivalent to the energy
needed to run a blow dryer on the highest setting. But there are ways to cut down on the costs
of electricity and keep your mining operation profitable.
Despite high electricity costs, Bitcoin is still the largest cryptocurrency in the world. In terms of
total energy consumption, Bitcoin is already higher than the average annual consumption of
twenty-five European countries, according to a study conducted by the British power comparison
site PowerCompare. The data reveals that the total volume of electricity used by Bitcoin miners
is equivalent to that of 159 countries. Other countries in the top 10 of the list include Ireland,
Croatia, South Africa, Egypt, Algeria, and Egypt.

Electricity is a major problem in Africa. In some countries, such as Nigeria, the electric grid is
unreliable, and blackouts can last for days. This discourages some people from mining.
However, electricity is not a major problem in Ghana, where 87% of households are connected.
The country’s rate of functioning connections is three times higher than in Guinea. Still,
electricity in Africa is an issue for people who are interested in getting into the crypto mining
business.

While some African countries, like Ghana, do not have a reliable power supply, other countries are
working to provide cheaper electricity and increase the capacity of mining facilities. For example,
the World Bank and the African Development Bank are working together to fund projects that will
encourage bitcoin mining in Africa. Moreover, several countries are building solar power plants
to reduce electricity costs. Aside from these initiatives, a new company, Brookstone partners, is
planning to build a 900MW wind farm in Morocco, which will provide enough power for a bitcoin
mining facility.

In DRC, bitcoin miners are using huge amounts of electricity to power their operations, outcompeting local people for cheap renewable sources of energy. The mining industry uses highly
specialized hardware that has a short lifecycle. Mining operations generate large amounts of
hazardous electronic waste and contaminate nearby land. Despite their economic benefit, they
are destroying the natural environment in a region that is not yet well-served by renewable
energy.

One study by the University of Cambridge Center for Alternative Finance estimated the energy
consumption of Bitcoin mining in the region at 130 terawatts per year, equal to the energy usage
of Sweden. That’s the equivalent of the energy use of Las Vegas or the country of Sri Lanka. But
even without these estimates, cryptocurrency mining is causing a huge carbon footprint. Indeed,
it uses more electricity than the United States, and its footprint is increasing as more people buy
it.

Bitcoin mining communities are flourishing in African nations. Egypt, Kenya, Ghana, Nigeria, and
Uganda is among the countries with active mining communities. Though the Egyptian
government has historically taken a strict approach to digital currencies, the mining community
has continued to expand and a network of underground Bitcoin miners has been established in
Cairo. Most of these mining operations operate under the radar. Though the public’s opinion of
Bitcoin in Africa remains mixed, there are some encouraging signs.

One of the main reasons for the spread of the bitcoin mining community in Africa is the need for
electricity. The rising cost of electricity in many African nations makes it difficult to run mining
rigs. As a result, some governments have taken steps to help promote the use of renewable
energy such as solar or wind power. However, such measures may only be temporary, and
governments must be proactive to prevent abuse of the technology. In the meantime, Africa is
poised to be a major bitcoin exporter, despite the challenges facing the industry.

Is crypto addiction having the same effects as drug abuse?