Home » Understanding the importance of Web 2.0 to Web 3.0 transition
News

Understanding the importance of Web 2.0 to Web 3.0 transition

The current Internet age (Web 2.0) has accrued millions of users all over the globe, boasting of over a 5-billion-people market

Understanding the transition from web2.0 to web3.0

The current Internet age (Web 2.0) has accrued millions of users all over the globe, boasting of over a 5-billion-people market. Specifically, the adoption has accelerated over the last decade with the increased accessibility of electricity in Africa. Consequently, there were 495 million smartphone users in Sub- Saharan Africa as of 2020, according to GSMA. The number is expected to hit 678 million by 2025.

But before the continent could fully settle into the web 2.0 way of doing things, the world is already headed in a different direction, Web 3.0.

Despite Web 2 gaining much traction, it still has several shortcomings. Over the years, the Internet has been plagued by data ownership, security and ownership issues. These defects have ignited the transition to a safer mode of accessing Internet services, Web 3.

The World Wide Web 3 seeks to include secure technologies like blockchain, artificial intelligence, IoT and augmented reality. The concept is fully invested in offering data ownership and confidentiality benefits.

Read: Multiparty computation is key in the advancement of Web3

What is the difference between web1 web2 and web3

The Internet has constantly improved due to technological creativity and increased efficiency and security demands.

The first version, Web 1, was created in 1989 by Tim Berners-Lee, a British scientist. It was initially developed to facilitate the automated sharing of information between scientists in universities and institutes globally. Web 1 gave its users a static experience to consume content and interact.

Furthermore, Web 1 users were more observers than participants. They had limited interaction methods facilitated only by chat messengers.

However, with the inclusion of smartphones, the demand for the Internet shifted to Web 2, where the users could not only consume content but could also create their own. The current age of the Internet is controlled by large tech companies such as Google, Twitter, Facebook, WordPress, e.t.c. 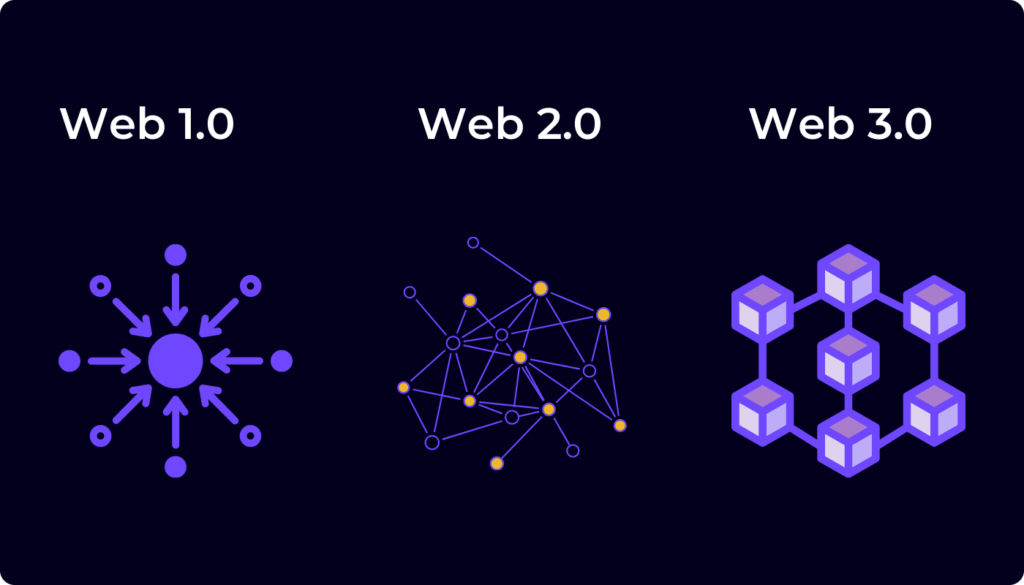 What is the difference between web1 web2 and web3. [Photo/ World Economic Forum]

On the positive, Web 2.0 has given birth to content creations by allowing them to showcase their works worldwide. They include photographers, developers, writers, and entertainers, among many others.

Among the main reasons why Web 3.0 proponents are demanding the transition is to access data in a decentralized way.

Web 2 has been utilizing users’ data to keep them in particular ecosystems, seriously depriving security and confidentiality. The big companies have also been notorious for restricting access to information at their convenience.

To fix these defects, Web 3.0 seeks to combine decentralization and user participation to create uninterrupted data access and ownership.

By using the aforementioned technologies, Web 3.0 seeks to dilute the power of big tech companies controlling user data in the web 2.0 ecosystem. With decentralization, the idea behind every new technology in the 21st century, users will take back control of their content and data ownership.

With complete data ownership, web3 users can value and sell their data on the Internet.

With the creation and ownership of content, data monetization will create financial freedom.

Web 3 will also increase the thrill of social interactions through technologies such as Augmented Reality, Virtual Reality and Artificial Intelligence. Among the successes of web 3 is the Metaverse.

Selling features of the Web3

The evolution to a semantic web will revolutionalize data access and manipulation to fit the users’ needs. The power of algorithms can be seen in the Youtube and Netflix sites, where automation eases Internet interoperability. In conclusion, Web3 is yet to materialize, and its superiority over web2 is not a left or right pick.

Chiliz token: A fan token shaping up the crypto-sporting world

Africa: the importance of understanding the crypto market and investment dynamics