Home » NFT Scams: Here are crucial elements to look out for as an NFT artists and collector
News

NFT Scams: Here are crucial elements to look out for as an NFT artists and collector

Blockchain technology is still a new concept. Demerits such as crypto hacks, NFT scams and blockchain vulnerabilities are likely to occur

Web3 technology has brought about numerous ascendancies. The mechanism behind the innovation  brought us blockchain technology and crypto, all marvels that this cyber-connected global village needed. In addition, artists were not left behind as NFTs later emerged from Web3, and everyone was in a frenzy.

Over the years, it has grown, and its underlying blockchain technology has rendered this web3 technology a marvel. Like all new inventions, some seek to profit over the uncultured and newbies. NFT scams are rapidly increasing. To your surprise, most of these scams aren’t as complicated or sophisticated. The critical element fake digital assets provide is the ability to “appear real”.

Here are a few major NFT scams you should be aware of.

Before delving into the NFT scams, we need to shed some light on how they work. NFTs operate on top of blockchain technology and point to a web link such as an image or video file. This proves the interoperability between Web3 elements; Blockchain, crypto, and AI. 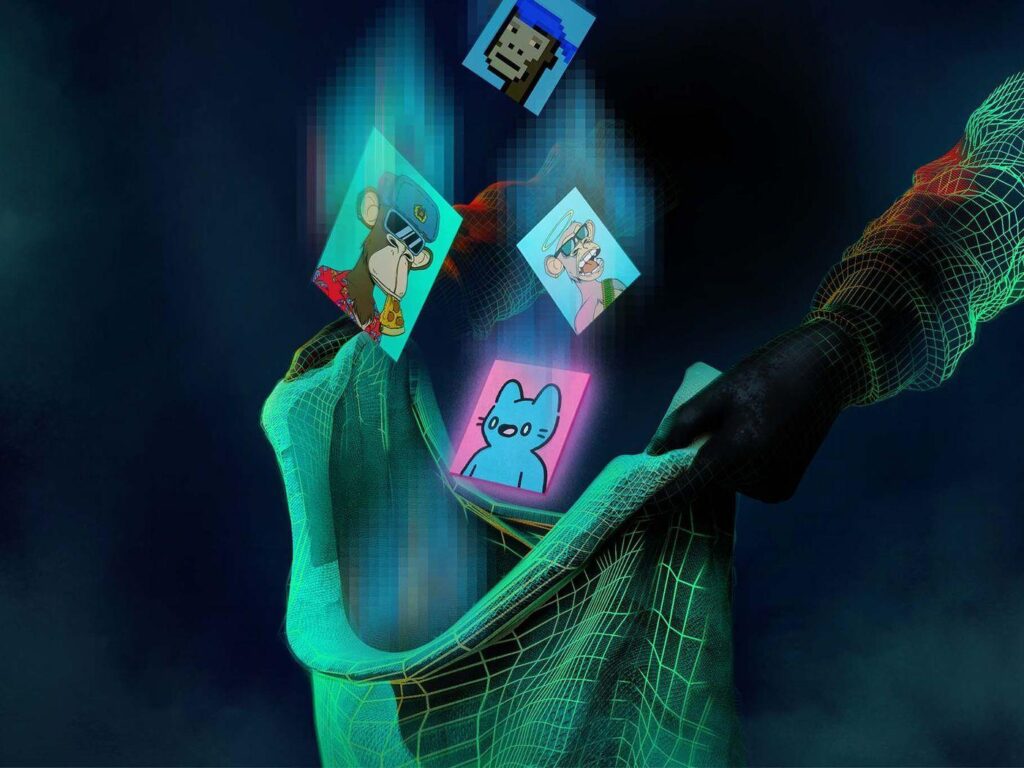 NFT scams have consistently plagued Web3 and blockchain security over the years. Knowing what to be weary of significantly reduces this number.[PhotoKongkiat]

This enables NFTs to operate on blockchain networks like Ethereum, giving crypto traders an added feature to venture in. This digital asset represents both tangible and intangible items n the digital world. They can comprise art, gifs and memes, videos, collectables, virtual avatars, music, and many more.

In a nutshell, virtually anything can become an NFT if it contains a unique identifier and a blockchain network. Instead of getting artwork from galleries, the buyer receives a digital file. This gives them exclusive ownership of the NFT since an NFT can only have one owner at a time.

The owner must sanction any duplication of this NFT or receive compensation. Its underlying blockchain technology gives it similar properties to crypto.

NFT artists have to own a digital wallet to store their NFTs, similar to crypto coins. In addition, most of the time, NFTs are purchased via cryptocurrency.

A rug-pull refers to a scam where the developers of an NFT hype its production over a while. The consistent advertisement of the NFT attracts many enthusiasts who spread the news further to peers and social media.

The key to this NFT scam is to build trust and fanfare over time. Some go as far as showing sneak peeks at the preliminary design of the creation process to reassure their content is legitimate.

After a while, they begin to offer “early-bird” access by hooking investors to pay before the release date to acquire the first chance to bit. After enough money is collected, the entire project shut down without so much notice from the developers.

One of the first NFT rug-pull was on Solana, known as the Iconics scam, where 2000 people lost 3000 Sol worth $130,000 at the time. The NFT scammer completely shut down and deleted their discord, and official Twitter handles.

Many legitimate platforms support NFT artists and eco-system and facilitate hundreds and thousands of transactions that generally involve NFTs. Various NFT scammers take advantage of their reputation and design an imitation of the legitimate website and pose, hoping to attract unaware individuals. This term of mimicry is known as a phishing scam which involves posing as a legitimate entity to lure in unexpected NFT artists.

Also, Read:  African Artists using NFTs to promote their culture to the world.

This kind of scam requires skill since some mimic websites are so good that telling the difference between the true ones requires some insight into blockchain technology.

Unfortunately, the level of this NFT scam is consistently rising. In February 2022, scammers made away with nearly $1 million worth of NFTs in a phishing attack targeted at OpenSea. Its enormous reputation became its undoing as scammers could duplicate almost every detail of its website. Those who are not keen on fact suffered greatly.

NFT artists thrive in the digital world by placing their NFT artwork on various platforms. They then open the floor to potential bidders, and after a while or with the highest bid, they can sell their NFT. This is how the world of NFT works. However, there are various loopholes in its blockchain technology.

Scammers place the highest bid when the digital assets are up for sale, and you’d naturally think it’s your best option. However, scammers can change the crypto used for the bidding without you noticing. Imagine a fraudster bids 20 Ether for your NFT art.

You’ll expect to receive around $9,000 (per the going rate at the time of writing). However, a crafty scammer can switch the crypto to 50 Dogecoin, which is worth less than $5.

It is best always to double-check which crypto is associated with the bid.

The price of NFTs gradually increases with the number of bids and demand. NFT scammers note this consistency and can artificially drive up the cost of their NFT collection. This will get the attention of high-end NFT artists and collectors, and some even genuinely start bidding over it.

To consistently boost its price, they make short bids within a short period. To an untrained mind, it will seem that various competitors are trying to acquire digital assets. The pressure of not being left behind sets in, and a high-end NFT artist places an authentic bid.

The scammers notice this, immediately accept your bid, and vanish into thin air. This leaves you with an overpriced NFT artwork whose quality is way below its price tag. You can avoid this by consistently reviewing the transaction history and wallet records of the NFT collection you are interested in. This gives a clear picture of whether the NFT is real or fake.

Web3 will most likely also suffer from severe hacks and scams. Blockchain technology is still a new concept; hence demerits such as crypto hacks, NFT scams and blockchain vulnerabilities are likely to occur.

Slowly learning from previous mistakes improves blockchain security. Using digital assets might appear a risky game to some, but others have gone through such rough terrains to get good.

Is DeFi the right path for Africa’s economic growth