Blockchain will be key for Africa's free trade implementation

The African Continental Free Trade Agreement (AfCFTA), initially proposed in 2018, became effective on January 1, 2021. The historic AfCFTA agreement has created the world’s largest free trade zone by the number of nations that have signed on. Across 55 nations, it links 1.3 billion people and generates US$3.4 trillion in the total gross domestic product (GDP).

This agreement might raise 30 million people out of extreme poverty if it goes into effect. For Africa, the AfCFTA regional market provides an enormous potential to diversify exports, accelerate growth, and attract international investment in times of economic uncertainty caused by the COVID-19 epidemic and Russia’s invasion of Ukraine.

Currently, Africa accounts for 3% of global commerce, with imports accounting for 13% of total trade and exports accounting for 20%. Free trade has been a goal of the African Union for a long time, with the goal of increasing the continent’s global trade contribution and the amount of intra-African commerce.

The World Bank has underlined that significant policy changes and trade facilitation measures are required to realize the full potential of the AfCFTA. African economies are nevertheless held back from their full trading potential by complicated and uncertain trade rules and expensive and time-consuming border processes. Cross-border traders also find it difficult to acquire and process trade assistance documents; get knowledge about the African market; or get trade financing between the various nations.

Blockchain technology can be crucial for AfCFTA

Additional creative solutions to these long-standing problems are required in order to fully benefit from AfCFTA. Due to its open, decentralized, and almost impregnable structure, the blockchain, a secure peer-to-peer transaction recorder, has become the preferred electronic “ledger.” A growing number of countries in Africa, including several in the developing world, are beginning to see it as a viable and scalable technology.

Transparency is a key feature of the blockchain, and it has shown considerable potential in removing trade barriers. Open-source but secure, the blockchain enables firms to quickly award and validate certificates, while allowing audits of data within the blockchain. Many African products, from Tunisian olive oil and Rwandan coffee to Zambian cassava, are now ethically validated supply chains thanks to blockchain technology. 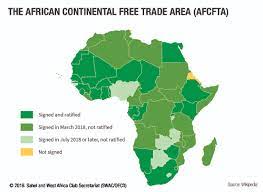 International trade might be transformed by the use of blockchain technology, according to recent studies. Trade financing, customs and certification processes, transportation and logistics insurance, and intellectual property management are all included in this category.

The use of blockchain technology in Africa has the potential to shift commerce away from paper-based systems, which are prone to corruption, time-consuming verification, and high prices for traders, and toward automated digital systems that are safer and more efficient.

Trade facilitation will also benefit from the use of blockchain notwithstanding its perceived complexity. There are several opportunities for governments, businesses, and investors to enjoy the rewards of reduced transaction costs, efficient delivery, higher exports, and more inclusive growth as blockchain continues to make inroads into global supply chains.

As a way to streamline border processes and regional single windows (a place where trade partners can present paperwork and other data in order to accomplish customs clearance), blockchain-based smart contracts have the potential to enhance data accuracy and efficiency at the border as well as transparency.

Electronic blockchain-based exchanges under the AfCFTA can further enable access to financing for small-scale farmers as well as other upstream players, including the unbanked, to develop inclusive supply chains. Employing mobile banking technologies to create digital identities and convenient transaction histories for individual farmers decreases risks to the bank while boosting access to funding for smallholders.

Further, the capacity to precisely trace cross-border shipments is vital to the verifiability of standards and certificates, as well as the dependability and timeliness of delivery. Traditional techniques of tracing are opaque, lack consistency, and are vulnerable to intervention and fraud, despite the fact that multiple standards exist to assist assure quality control and compliance.

The implementation of the AfCFTA is still in its infancy, and customs procedures vary widely throughout the continent. Countries, trading blocs, and even individual ports have their own processes, which might entail hundreds of papers, information exchanges, and supply chain participants. Using blockchain, this cumbersome procedure may be digitalized and simplified, saving time and money in the customs clearance process by as much as 80 per cent.

One such site, TradeLens, allows traders to upload papers to a single chain and watch the status of their paperwork and shipments. More than 20 port and terminal operators from across the world have already joined, including facilities in Benin, Nigeria, Liberia, Mauritania, Egypt, and Cote d’Ivoire, illustrating the need for blockchain-simplified solutions of this sort. This and other blockchain-enabled solutions have the potential to minimize risk, time, and money for cross-border commerce in African countries.

Additionally, blockchain can facilitate e-payments in trade finance. Importers, exporters, and financial institutions all participate in a flurry of financial guarantees and legal documentation in every trade transaction to ensure that each party would fulfill their end of the bargain. It takes longer for items to move and money to be paid when using a paper-based system. Blockchain technology expedites the ways organizations may track and verify the accuracy of these documents, decreasing transaction time and cost.

Electronic signatures on bills of lading communicated between carrier and shipper will be made possible by a partnership between blockchain platform Wave and financial institution Barclays. The Eastern and Southern Trading and Development Bank, meantime, recently executed a real USD 22 million sugar trade transaction utilizing smart contracts, which automatically execute deals whenever certain pre-defined conditions are met. Consolidating and automating transactions in this way lowers the administrative hurdles that cost time and money for merchants all over the continent.

Of course, there are disadvantages to every technology, and blockchain is no different. First, implementing new technology, merging it with preexisting legacy systems, and sustaining it over time all involve large investments for governments with limited resources and numerous competing objectives. To make matters more difficult, there is a general lack of standardization and interoperability planning in the sector, raising the possibility that the platform, data format, security protocol, and other protocols implemented by a country will not be compatible with those implemented by their trading partners. A hacker or attacker can still compromise a blockchain-based system.

Based on the system architecture, confidentiality, privacy, and information security considerations are also applicable, such as single points of failure/compromise in some circumstances. Finally, data transfer may become slower as blockchain networks grow in size and include more users. This latency issue can become troublesome for operations, such as payments, that need near-instantaneous response times.

When it comes to addressing these issues, the international actors should not overlook the importance of using blockchain as a trade facilitation tool. From cheaper transaction costs and less time at the border to greater traceability and rapid digitalization, the ramifications of blockchain are vast for the world’s fastest developing continent.

To meet the increasing need for efficiency and a beneficial effect, African countries would stand to gain substantially from becoming early adopters of this decentralized ecosystem. As the AfCFTA ramps up for full implementation, blockchain will be a critical instrument to help release its USD 3 trillion in potential economic advantages.

Lack of education hampering crypto adoption and acceptance in Africa