Twitter users can now display, buy and sell NFTs on the platform

News of cryptocurrency and NFT adoption into the mainstream seems to be coming quicker and harder with each passing week. A few weeks FIFA adopted NFTs for World Cup Classic highlights as we count down to the 2022 FIFA World Cup. Additionally, Ethereum users can now check their address balances on Google.

Twitter, which recently completed a protracted sale to a consortium led by Billionaire Elon Musk, plans to allow users to buy, sell and display NFTs through the popular social networking site. 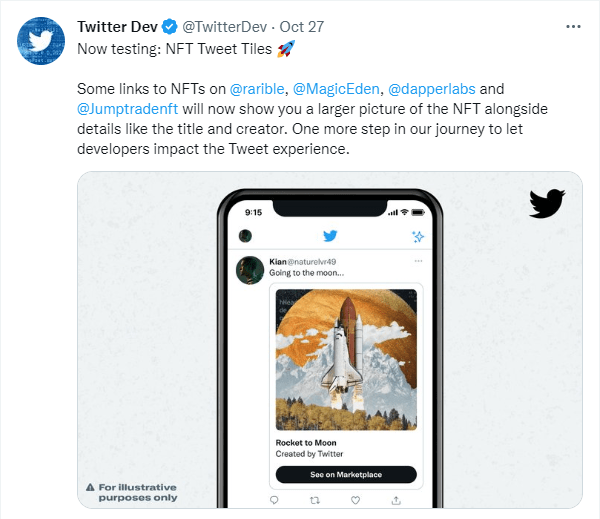 The tweet above announced Twitter’s cooperation with four NFT marketplaces, allowing users to buy, sell and display NFTs through tweets. The function, which will go by the name Tweet Tiles, will display NFT artwork in a separate panel. From this panel, viewers can click through to the listing of the respective NFT marketplace for each NFT.

Twitter is currently testing the feature, which works with Magic Eden, Rarible, Dapper Labs and Jump.trade. Between these four marketplaces, you will find NFTs hosted on Tezos, Immutable X, Polygon, Flow, Solana and Ethereum blockchains.

This is not Twitter’s first foray into NFT integration. Twitter NFTs came into the live stream when the application enabled its premium service, Twitter Blue subscribers, to use NFTs as their profile picture. The feature was later rolled out to the web and Android users as well.

The service was rolled out to a few markets. Twitter, however, showed signs of intending to adopt NFTs fully into the Twittersphere. According to the social media company, the current will be visible to all users regardless of platform.

In September, Twitter announced this feature was coming alongside other NFT-related features. Authentication protocols integrated into Twitter would make it easier for creators to showcase their NFTs. This would come in handy when they included the ability to display collections as they plan to.

Twitter has identified the integration of blockchain and other decentralized technologies as an area for strategic push going forward. The platform recently allowed Bitcoin tips to other Twitter members. The appointment of a lead in crypto engineering also signals just how important the area is to Twitter.

Twitter famously produced its own NFTs last year though they were offered for free. These developments have all the hallmarks of an organisation that is taking new technology seriously.

Twitter, a social media website that based interactions on microblogging and conversation, found its popularity in disseminating the news rather than making it. The latter is how Twitter has been characterised much of the year 2022 thanks to a protracted sale of the social media company to somewhat eccentric Billionaire Elon Musk and a consortium of investors.

The deal was in critical condition for months and finally came to fruition in October. Part of the controversy was claimed by the consortium led by Musk that Twitter’s user numbers (237.8 million at last count by Statista.com) were inflated by the presence of computer-run accounts or ‘bots’. The deal eventually pulled through, and it looks like Twitter is wasting no time in forging forward with the task at hand.

NFTs and Social Media marriage is inevitable in the future. The social media infrastructure is the use case for which NFTs and the security around them were built. The ability to verify identities and ownership of images seems like something right out of a social media purist’s diary of dreams. Instagram has also made it clear that it will make a big play for the NFT market.

While Instagram has the advantage of being built for images (therefore better for NFT art), Twitter’s interaction-heavy experience could prove to be a trump card.

It seems the world is starting to accept and perhaps even understand NFTs more and more. FIFA, organisers of the biggest sporting event by any measure, the men’s football World Cup which kicks off on the 20th of November in Qatar, announced they would be using NFTs to capture classic highlights from past world cups. Token-gating and other utility-adding features to NFTs could play well into the hands of social media companies like Twitter as they find ways to integrate NFTs into their world.

Social media makes the perfect playground for any attempt to improve the widespread adoption of any technology. Twitter’s moves toward NFT integration make this clear.

Read: The Evolution of Digital Asset Marketplaces in a Web3 Economy