Progress is an evolutionary component man has always had. From Web1, the first interaction of the Internet, to Web2, which ushered in the digital age of the Internet. Finally, Web 3 brought about Decentralized finance, digital assets and the Metaverse.

Each has created an upgrade of the previous discoveries, while others have presented entirely new concepts. In the Crypto ecosystem, Ethereum has pioneered various generation blockchain networks such as the Polygon network and other decentralized applications.

Vitalik Buterin, CEO of Ethereum, stated that the vision behind the blockchain network was not to duplicate Bitcoin’s mechanisms but to create a platform where innovators can explore their ingenuity and innovation. As such, from Ethereum, the Polygon network has taken the next step to develop third-generation decentralized applications. EasyFi is a Polygon project that has caught the eye of many investors within the crypto world.

EasyFi network is a Polygon project dedicated to decentralized finance and a universal layer two digital assets lending protocol. DeFi is a lucrative venture, and various Ethereum projects have mainly focused on applying faster and more efficient services, the primary purpose of EasyFi.

On November 15 2021, EasyFi launched, and six money markets supported it by supplying and borrowing on the Polygon network.

Since the Polygon project provided cheaper and faster transactions, many users quickly jumped on its launch. Its main selling feature is its accessibility to many users without necessarily congesting Polyogn or Ethereum’s network. 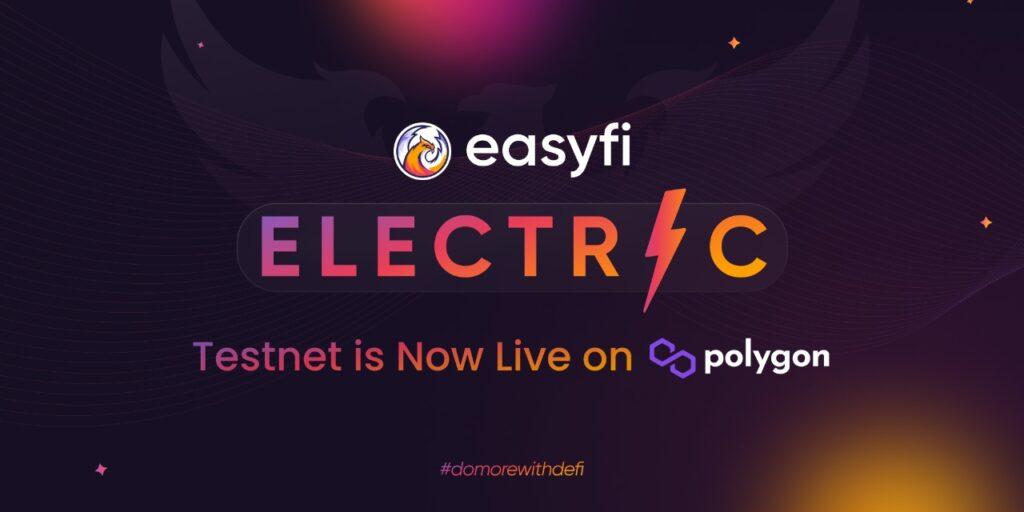 EasyFi, a Polygon project, focuses on the DeFi and digital asset world and catches the attention of the Binance chain and the Ethereum network.[Photo/ZexPRWire]

It is a Layer 2 protocol because its initial version, EasyFi version 1, is stated as a fork of Compound finance. It initially ran on the Ethereum chain. The Ethereum chain is the leading chain that hosts the Polygon network, hence the term Layer1. It runs on the first layer of the overall network. It was later updated and improved and placed on Poygon’s network enabling collateral-based secure loans on digital assets.

Anshul Dhir stated in an interview, “Six money markets on our protocol on Polygon Network are now open for operations. We have completed a major milestone in our Q4 2021 roadmap: Full protocol launch. We have launched the markets first on Polygon Network.”

Later, EasFi launched its services on the Binance Chain and is listed as one of the first few DeFi-based Polygon projects to be listed on the Binance innovation zone. Its applicability and sheer technology landed its position within the Binance ecosystem since it generally avoids integrating projects below a 2 million market cap. This statement speaks volumes about the potential of EasyFi.

EasyFi is a DeFi-based project and offers specific services, such as essential collateralized loans. Essentially these are loans received after a user takes a certain amount of their digital asset.

This, in turn, acts as a reassurance that the user will repay their loans; if not, EasyFi will utilize their staked digital asset as compensation. Still, in EasyFi, load users with a good Trust Score, a decentralized credit score rating mechanism, will be eligible for loans under lower collateral. This feature has significantly increased its rating and hence is the primary function of EasyFi.

A crucial demerit that most traditional payment services had was their high-interest rates. In some financial institutions taking a loan of $30000 would result in a repayment of at least $40000, a major rip-off. EasyFi provided micro or small loans quickly with more meaningful interest rates to address this issue. These microloans are especially popular during medical, business or even domestic emergencies.

In digital assets hacking or scams are rampant, especially around DeFi organizations. To ensure userbase safety, EasyFi has incorporated deep groundwork on the various security measures needed before launch.

Halborn security, a leading security organization in Web3, was included within EasyFi. Their main task was to conduct multiple security checks on EasyFi smart contracts. In addition, audit the underlying mechanism of the Polygon and Ethereum network supporting it.

After a thorough and deep audit, analysis and testing, the Polygon project finally received the green light to launch. It also does periodic audit checks to ensure no anomaly is detected, giving users a secure and safe platform to conduct their transactions.

EasyFi continued its progress and launched a Dual Farming Program enabling users to earn MATIC tokens, Polygon crypto coin, from staking their native token EASY. In doing so, the Polygon project received a sizeable portion of MATIC tokens from its hosts to help incentivize its users.

Around 5 million MATIC contributed to the program giving the Defi-based program the necessary resources to sustain its new feature. The Dual Farming Program not only benefits its users but also increases the traffic and reputation of the Ethereum network.

Many even claim that Ethereum is hosting a generation of innovations and ingenuity and would lead the world into a new age of technology.

Phishing Attack and how it plagues blockchain security