Cryptocurrency, the Metaverse, the NFT marketplace and blockchain technology are all components of Web3. Individually they are each unique, only sharing one essential element; their underlying blockchain technology. This allows interoperability between each part giving birth to new affiliations.

With World Cup nearing, the sports world has decided to join in the eave of technology. In a previous article, we elaborated on the Chilliz token, a crypto exchange platform that merged the Sporting world and cryptocurrency. Moreso, Binance decided to take the next step and bring in a new collaboration between Sports and Web3. Hence, they signed Cristiano Ronaldo and are releasing his first NFT Collection.

NFT collectors and sports fans are excited about this new endeavour, especially with the current state of crypto volatility.

The future of Sports and Web3

The sporting world is one of the oldest activities that man has indulged in the last century. Over the years, different new sporting games have emerged and their reach and fame grown exponentially. Today the Sports world is more advanced than several financial institutions.

Sports have realized the potential and the profits that incorporating cryptocurrency might bring. Hence several agencies and investors have supported and funded various intellects to build and maintain a blockchain network that caters to Sports and Web3.

One of the first merges occurred in December 2014, BitPay and ESPN events signed a sponsorship deal together. BitPay eventually rose to fame due to this bold and daring move. Later, it sponsored the Sit Petersburg Bowl, an annual post-season football game.

This initial step for the crypto exchange platform inspired the remaining lot to take the initiative and try various Web3 features. CashBet Coin allied with Arsenal Football Club as its exclusive and official blockchain partner.

These collaborations resulted in the surge of sports fans and crypto coins, pioneering the age of Sports and Web3. Finally, Binance has also decided to pick up the steady pace of the collaboration to improve its NFT collections and ratings.

Cristiano Ronaldo announced that he would release his first-ever NFT collection on November 18th. This decision was part of a multi-year partnership with Binance. Binance Co-Founder and Chief Marketing Yei believe that the metaverse and blockchain technology is the future of the Internet. 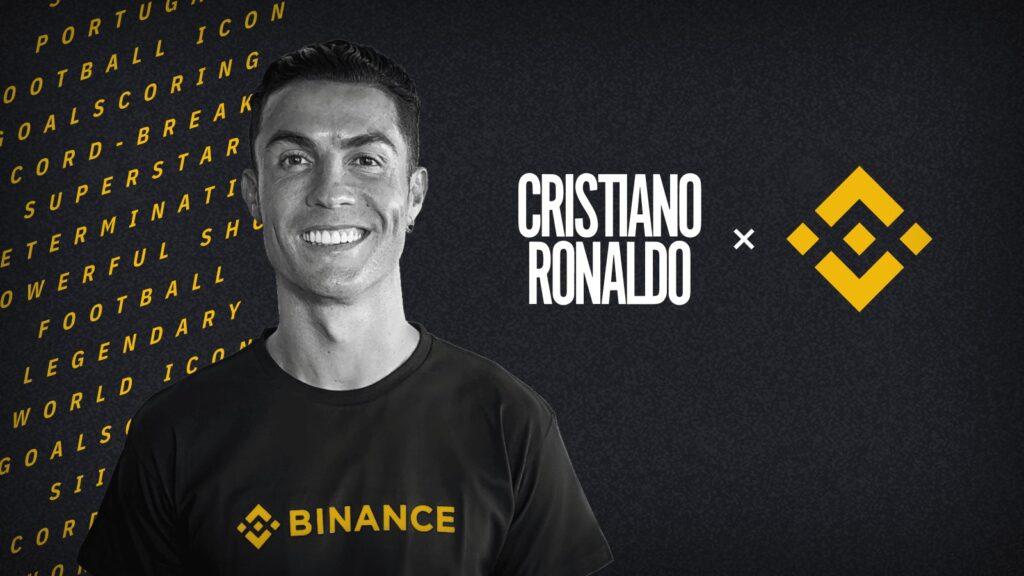 Cristiano Ronaldo partners with Binance to launch his first NFT collection. Will this be a new age of Sports and Web3?[Photo/Binance]

The crypto exchange platforms hope that by incorporating Cristiano Ronaldo, they can educate and help more individuals understand the concept behind blockchain. As a source of inspiration, Cristiano Ronaldo will showcase how Sports and Web3 can successfully merge.

In addition, it indicates the applicability of Web 3 in different areas. In an interview, Ronaldo stated that this venture was significant to him since it entails creating something memorable not just for himself but for all his fans, who are a primary focal point in his success.

The awaited NFT drops fall under four rarity levels; Super Super Rare(SSR), Super Rare(SR), Rare(R) and Normal (N). Binance will create each NFT statue that depicts Ronaldo in an Iconic moment from his life, from a career-defining bicycle kick to his childhood in Portugal.

Binance will release 45 of the highest value CR7 NFTs(5 SSR and 40 SR), auctioning them on the Binance NFT marketplace. The auction will remain open for 24 hours, with NFTs awarded to the highest bidder. Sports and NFT fans will flood the network, so getting to it first is crucial.

Also, Read The Future of Web 3, NFT and Blockchain Technology

Ronaldo’s NFT collection will come with additional perks depending on its rarity:

However, it did not stop there, as the crypto exchange platform is set on hooking additional users and sports fans. Each new user who registers with Binnace.com will receive a Cristiano Ronaldo Mystery Box, which may include limited -edition Ronaldo NFTS. In addition, the mystery Box will be available for the first 1.5 M users who sign up with the referral code ID RONALDO or via the dedicated CR7 page.

Sports and Web3 are no longer a dream or a want but an actuality. Furthermore, Binance is among many crypto exchange platforms to collaborate with sport-affiliated organizations. This allows sports fans and crypto traders to enjoy the benefits of both worlds in an environment that caters to their very needs.