Ripple makes a move for the Africa mobile money market

Africa is continually touted as a massive opportunity for Crypto and web3 technology. The African financial landscape presents the most significant opportunity for cryptocurrency and web3 technology use cases. One of the world’s most popular cryptos, Ripple, has partnered with digital payments gateway MFS Africa to enable real-time cross-border mobile money payments across Africa.

In a statement on the Ripple website  late last year, the company announced

Ripple, the leader in enterprise blockchain and crypto solutions, announced its entry into Africa in partnership with MFS Africa, a leading digital payments gateway. The new partnership will see MFS Africa using Ripple’s On-Demand Liquidity (ODL) solution for crypto-enabled payments to make it easier than ever for consumers and businesses in Africa to make real-time payments with their mobile phones across borders – all powered by Ripple’s financial technology, RippleNet.

The global mobile money market is worth US$1 trillion, according to GSMA Africa accounts for a whopping 70% of this mobile money market, equivalent to US$700 billion in transfers in 2021. This represents a 39% increase on the prior, with near certainty that 2022 will represent a further increment. Mobile money has been wildly successful in Africa as it offered simplified opportunities for financial inclusion on a continent where infrastructure lags for urban communities while almost non-existent for most rural communities.

Ripple’s On Demand Liquidity (ODL) technology was launched in 2018. The technology brings real-time cross-border fiat to fiat payments through RippleNet. A sender in country X sends money in their fiat currency, and the recipient in country Y receives it in their fiat currency. The transfer is facilitated through the Ripple blockchain. ODL brings the ability to process these transactions quickly and at scale. As Ripple opened up the technology to more use cases, it gained widespread adoption in 2022.

We’ve seen many cryptocurrency players looking to Africa. Binance and many others have turned their eye to Africa. It makes sense as Africa is severely underserved in the ways cryptocurrency can best help. A 2012 study estimated financial inclusion in Africa at 23%; only the Middle East had a lower inclusion rate. Five years later, in 2017, the highest-rated African countries had inclusion rates of around 80%. The case study of El Salvador, the first country to adopt Bitcoin as legal tender, shows a massive improvement in financial inclusion with the adoption of cryptocurrency. So Ripple’s aim for Africa is consistent with the principle of going where you are most needed. 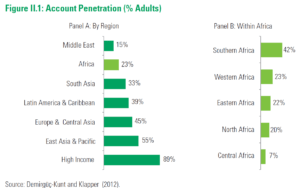 All that glitters is, however, not gold, and it’s fair to point out that Ripple has not had an easy ride in the United States, where it has been fighting legal challenges for the last 3 years. The challenges are based on accusations that Ripple was effectively running an unlicensed financial services provider. While Africa’s US$12 trillion market opportunity is attractive, it would be folly to discount Ripple’s troubles in other markets and how this may have influenced the decision.

Africa has pursued increased intra-African trade for over a decade through ideas such as AfCFTA and regional blocks. While there has been a success, it’s not a stretch to say this has been underwhelming. A look at the African business landscape shows part of the problem; a lot of business in Africa is informal. Channels like mobile money are popular because they better suit the needs of African citizens than banking systems born of Western thinking. The challenge is to combine this technology with the goals of intra-Africa trade. A cross-border mobile money payments system connects more African wallets to more marketplaces. The easier time money has to move, the more likely it is to move.

It is unlikely that this is the last we will hear of Ripple in the African market. While MFS Africa offers great reach with 35 African countries served, there are still 29 countries excluded from that list, and we can imagine both companies will be looking for ways to bridge that gap.

Blockchain interoperability, its successes and failures