The applications of blockchain technology are innumerable. Its relatively new nature has allowed expanding its useability throughout different industry sectors. One of its many applications that some may need to consider is blockchain in education. Moreso using its decentralized nature to improve Africa’s education system, which, despite its steady incline, its growth rate is still relatively low. The blockchain adoption rate in Africa is at an all-time high, and the very concept of Web3 may flourish within its ecosystem.

The continent’s education system is crucial since it determines its progress. Countries prioritizing their education sector have led prosperous economies mainly due to their graduates’ knowledge, innovations and applications.

This creates a knowledge economy catering to various advances in today’s world. Governments should address this same insight in Africa’s education system. Since most African countries prioritize agriculture and manufacturing as their primary source of income, the education sector had a rocky start. In some cases, only a tiny percentage of African children could acquire decent educations.

This brought about the attention of various key figures in the world who advocated for the restructuring of Africa’s education system. As a result, the numbers steadily grew and slowly by, the days children would be working instead of attending school were almost at a close. Almost generally constitutes of the various African communities that base educating their children off of their context of discriminatory social institutes and cultural norms. A few decades back, gender inequality within Africa’s education system was troubling, but as time progressed, so did the end of those social norms.

According to UNESCO’s Institute for Statistics, more girls than boys remain out of school in Sub-Saharan Africa. In addition, girls who attend school tend o perform better than boys, who stay longer than girls. This causes a spiral of events further contributed by its education infrastructure. 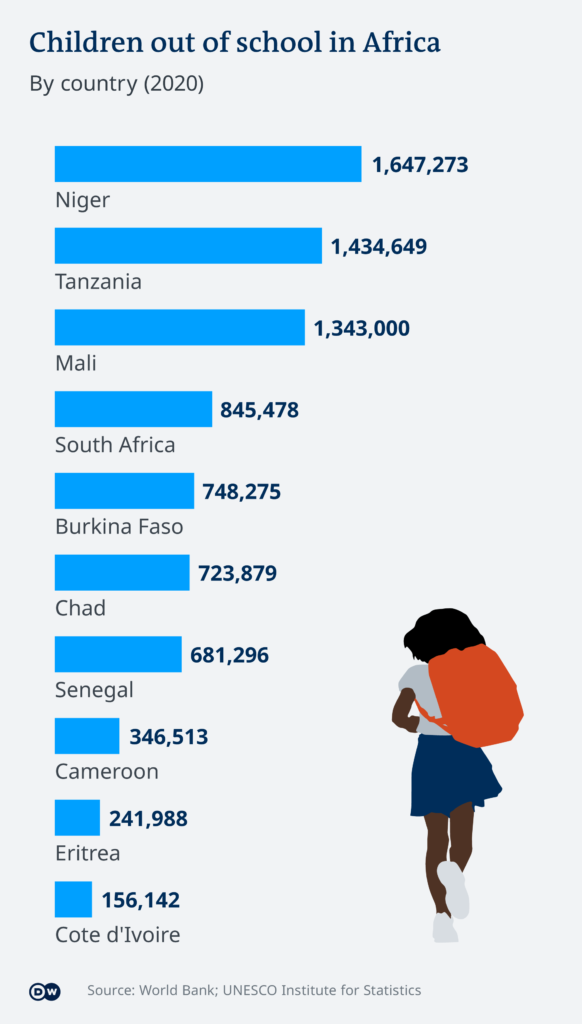 Africa’s education system has had low numbers due to various circumstances, but with blockchain adoption rates increasing, it may change sooner than expected.[Photo/Mirror.xyz]

According to UNICEF, only 76% of young people attend primary school, while less than 10% attend university. Fortunately, the blockchain adoption rate in Africa has led to the rapid growth of blockchain in education.

Due to the various applications of blockchain, Web3 technology can curb various constraints facing Africa’s education system. Indeed, many merely thought of studying blockchain at schools, but instead, we can apply its various functionalities to improve it.

Also, Read The steps you need to take to become a blockchain developer.

Blockchain has proven versatility in the current world due to its immutable and decentralized nature. The blockchain adoption rate in Africa recently skyrocketed in 2022. However, how does blockchain, a system used in the financial and medical sectors of the world, improve Africa’s education system?

Issuing and Storage facility for certifications

Sadly, only a select number of universities and institutes can provide up-to-date technology and systematic frameworks. What many find hard to embrace is a simple fact that na institute can “accidentally” lose a portion or an entire year’s worth of academic evidence.

This fact led to the lucrative venture of forgery within Africa’s education system. In most cases, professionals or even high individuals within various African governments have forged academic certifications—furthermore, the numerous cases of students losing their academic credentials due to the poor infrastructure of an institute. Thus proving or disproving their existence indeed becomes hectic.

Integrity is a blockchain application that will solve the high cases of false academic documents in Africa.[Photo/Medium]

As a result, finding legitimate evidence of whether or not an individual is innocent is rather cumbersome. Furthermore, in some African countries, you are guilty till proven innocent.

Blockchain technology steps in to curb this dilemma quite quickly. Immutability is one of the numerous applications of blockchain. Thus integrating an accounting system within Africa’s education system will prove fruitful. Blockchain in education can process certificate issuing and storage within a decentralized system.

This creates a vast database proving that an individual completed their academic journey. Various universities beyond Africa’s borders have developed such kind of system. Massachusetts Institute of Technology was the first to develop and implement a standard for issuing and verifying digital certificates through blockchain technology. Applying this would improve the integrity of Africa’s education system.

With the current improvement of Arica’s education system, more and more children are receiving a chance to receive the proper education. Unfortunately, receiving the high quality of education required is an entirely different story. Unfortunately, some African countries need more education infrastructure to cater entirely for a child’s educational growth. As such, most institutes often need more teaching staff and equipment.

This ultimately leads to the prioritization of some students and the neglect of others. One of the numerous applications of blockchain is its ability to function as a tracking system. When implementing blockchain in education, an institute can identify a student and have the capabilities of tracking their progress.

Africa’s education system can incorporate blockchain to track a child’s attendance, classwork and additional activities. This creates an adequate database that allows systems of even teachers to note any peculiar behaviours of any particular student. This can significantly benefit Africa’s blockchain adoption rate and offer insight into a child’s progress.

One of the core principles of blockchain technology is empowering the users directly by applying a form of identification unique to them. Education institutes can also apply this feature to intellectual property. As Africa’s education systems slowly improve to establish a knowledge economy having the rights and ownership of your innovation is highly recommended. Web3 technology will revolutionize the concept of copyright privileges on Intellectual property.[Photo/Getting-Smart]

Most successful industries and franchise had their first iteration from a school project. Unfortunately, it is common not only in Africa’s education stem but the globe, where institutes, fellow students and teachers steal innovations from others. Traditional copyright and patent procedure often are expensive and need to be more convenient processes proving their inefficiency.

By incorporating blockchain in education, students/ staff can own their projects. It provides proof of the project, and institutes can implement it in various ways.

Africa’s education system is gradually expanding as more governments adopt new policies to provide accessible or affordable education. Web3 technology can utilize this opportunity to integrate blockchain in education for an administrative role.

Finding a decentralized format that allows the proper management of a school system without the need for physical presence will improve Africa’s education system. In addition, an institution’s management and financial sector will quickly increase efficiency and trustworthiness. Sadly, Africa’s education system suffers from corruption. With integrity being a core blockchain application, schools will be more open and transparent than ever.

Hope for blockchain in education

Web3 technology and Africa’s ecosystem are like bread and butter. Given its slow progression in Web2, the blockchain adoption rate in Africa is at an all-time high. Implementing all these applications in its education system will be simple, but only if done correctly.