Home » The Lightning Network: A critical tool to the success of crypto in Africa
News

The Lightning Network: A critical tool to the success of crypto in Africa

Every day, we see signs that the world is on a path adopt cryptocurrency, specifically bitcoin, as a mainstream form of completing financial transactions

Every day, we see signs that the world is on a path adopt cryptocurrency, specifically bitcoin, as a mainstream form of completing financial transactions. Currently, Bitcoin is the national currency of two countries and is a means of payment in big companies such as Tesla, PayPal, Microsoft, Gucci, Balenciaga e.t.c

But for bitcoin to succeed, a few things need to improve its blockchain network.

Scalability is one of the points of contention that qualifies Ethereum to be better than Bitcoin in global adoption. Scalability in cryptocurrency means a blockchain’s ability to handle many transactions in a second without compromising the security and effectiveness of a network.

Bitcoin completes an average of five transactions per second (TPS), while Ethereum completes double that amount.

Scalability is a critical factor if any cryptocurrency is to succeed as a legal currency in many countries globally. Currently, two countries, the Central African Republic and El Salvador, have legalized bitcoin, with several others to follow. The continuous adoption means that many people will be trading in bitcoin, and five transactions per second (TPS) can never be enough.

Read: Bolt Card: A Bitcoin equivalent of a Visa/Mastercard

However, there is a technology to solve the Scalability issue for Bitcoin, and that is the Lightning Network.

What is the Lightning Network in cryptocurrency?

The Lightning Network is a second-layer payment protocol that operates on top of a blockchain. It was developed by Joseph Poon and Thaddeus Dryja and published in Lightning whitepaper back in 2015.

How does the Lightning Network work?

For the bitcoin blockchain, the Network completes a maximum of seven transactions per second, and the others line up waiting to be processed. The decentralized Network dictates that all blocks in a blockchain must confirm the transaction. 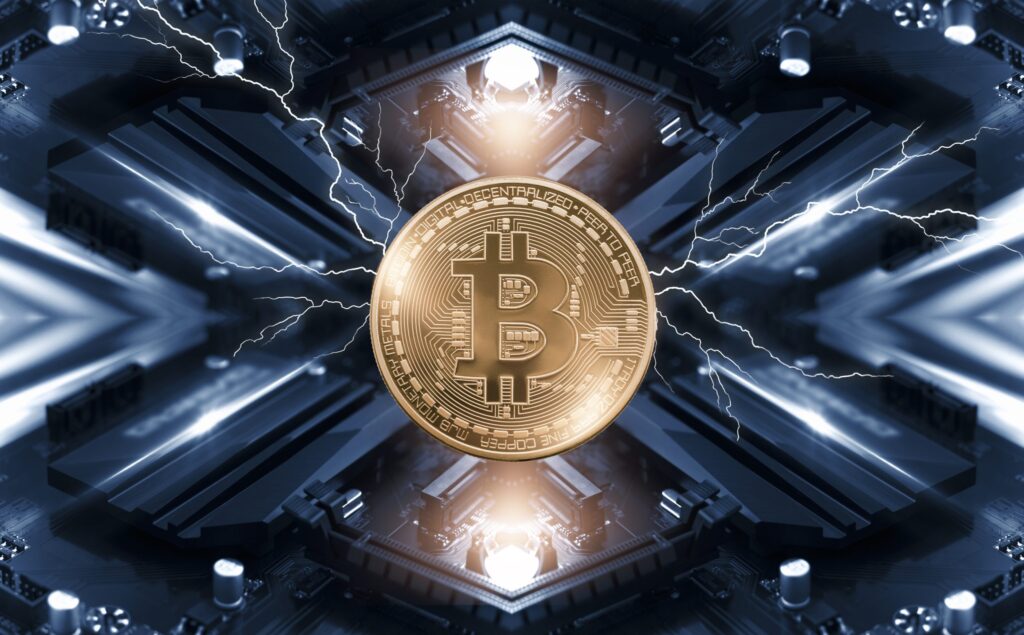 However, the Lightning Network works by taking transactions away from the main chain and creates user-generated bi-directional payment channels without requiring a global consensus.

The Network allows blockchain users to make almost instantaneous peer-to-peer cryptocurrency transactions at a much faster rate and lower fees. The lightning network operates under these guidelines:

The Lightning Network forms a channel of interconnected networks, and every transaction takes the shortest route to complete a transaction. It has massive potential to improve the cryptocurrency and the bitcoin ecosystem.

Bitcoin operates under a system known as Proof-of-work (PoW). This means that every block on a blockchain must confirm a transaction before it reflects on the entire system. PoW consumes a lot of energy, and bitcoin critics say that bitcoin mining contributes massively to environmental pollution and climate change.

This year, Ethereum will be jumping ship from PoW to PoS. This is to reduce the emission of greenhouse gases into the atmosphere.

Bitcoin is stuck with the PoW system, which protects its decentralization. Will the PoW system drive people and nations away from adopting bitcoin as a globally accepted currency?