Home » Akon City: A fleeting dream blown by the winds of resistance
News

Akon City, the so-called Wakanda-like city is still yet to showcase any relevant progress.

Africa’s ecosystem has struck the world in awe as blockchain technology reminds everyone that Africa is still a land of untapped potential. Chainanalysiss shed light on Africa’s potential within the crypto Industry and more so in blockchain technology. The same hardships faced within Africa have transformed it into the perfect ecosystem to adopt Web3.

Key figureheads within the crypto industry and other sectors have seen this opportunity and opted to set shop within Africa. This initiative is sure to boost Africa’s ecosystem. Among these key figureheads is Akon, an international singer and an African Child from Senegal who seeks improvement through web3 and blockchain. Akon set in motion the creation of an African cryptocurrency, Akoin. In addition, his most ambitious venture yet, building a technological city, Akon City, attracted plenty of attention.

Unfortunately, due to various circumstances, multiple individuals have seen this as a fleeting dream. The so-called Wakanda-like city is still yet to showcase any relevant progress.

Akon announced the project of the very first technological city, Akon City, in 2018. At the time, the ambitious singer desired to support Africa’s ecosystem and, more so, Senegal, his native home. He stated that Akon City would be a “supercity” packed with skyscrapers that vividly represent Africa’s will.

In addition to this wonderous dream, he also announced the creation of an African-based cryptocurrency Akoin. In an interview, Akon stated that Akon City would be a materialization of Wakanda. 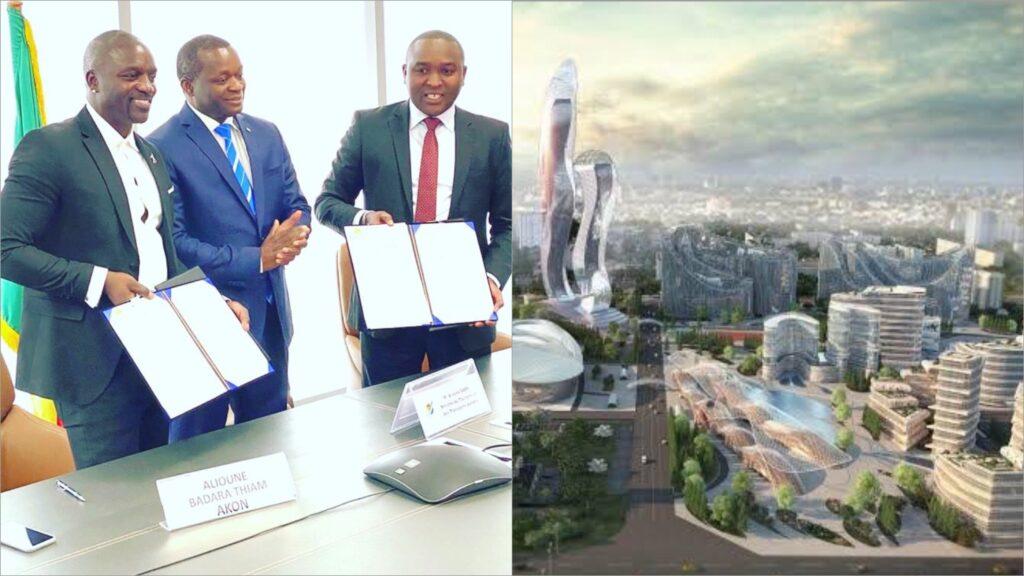 A fictional city that generally represented the pride of African ingenuity and culture. Akon City was a standing signal of hope, a statement for other African nations and the world. Phase one of the city is to have the basic features of a city; roads, a campus, a mall, residences, hotels, police stations, a school, a waste facility and a solar power plant.

Akon city is scheduled for construction in Senegal as a tribute to his country. The city was to cost approximately $6 billion, and after a series of scepticism from other Senegal officials, the people slowly began to believe. What ultimately coined his vision was the official purchase of the area he would build Akon City. On September 2020, Akon launched his city and elaborated to several journalists and natives that Akon Cty would transform the livelihood of the neighbouring citizens and Senegal.

The initial plans of Akon City were dubbed the Crypto City in August 2020. During such a time, Africa’s ecosystem steadily increased its crypto adoption rate, and numerous Crypto millionaires were upcoming. The timing could’ve been perfect as Akon took the next step to develop the Akoin cryptocurrency.

Akoin cryptocurrency and its role in building Akon City

The initial plan for the city greatly hinged on the management of the Akoin cryptocurrency. In a statement, Akon said that the plan was to build the financial structure of his city on Akon. Africa’s ecosystem provided the necessary opportunity for decentralized finance to thrive. Launching Akoin was an integral part of financing the city. Unfortunately, it did not go as planned.

Despite its poor start, Akon took a different approach to realize some profit. The Akoin website announced a pre-sale opportunity called the Token of Appreciation (TOA) campaign. Akon announced the campaign over two years before the creation of Akoin. It was a fundraiser to cover the cost of launching the Akoin when the time was right. Each amount sent to the TOA initiative was branded as a donation to the Akoin TOA website.

Fortunately, Akon added special incentives to those who donated and believed in his cause. TOA website told contributors that for every $1 they put in, they would receive four Tokens of appreciation. The system would later convert these TOA tokens into Akoin coins. Akoin crypto coin is an initiative to incorporate Africa in the global crypto industry further,[Photo/TravelTomorrow]

In 2019 the TOA campaign concluded, and according to reports, the entire process yielded $290000. After two years of development, Akon’s team offered two options to their donators. The first was to receive a full refund of their original donation or an Akoin MasterCard of the same value. Unfortunately, all the TOA tokens acquired are still non-functional, and many have turned bitter over this news.

Unfortunately, this was the beginning of the inevitable downfall of Akon’s dream of an improved African ecosystem. His TOA project shifted to working against his initiative as their organization needed help to refund its donors fully. At the end of it, all plenty of individuals asked where did the $290000 go?

The beginning of the end for Akon City

With Akoin’s value steadily plummeting, many asked what happened to Akon City. Upon inspection, the city still needed to start clearing the land, let alone begin construction. Over the years, Akon stated that the initiative received multiple delays. A local journalist once visited the esteemed site and was unfortunately greeted by the sounds of bleating goats and disappointed Senegal residents.

One resident stated that they initially thought that this initiative was an opportunity to work as a nation to build something spectacular. Akon was ready to offer residents employment to assist me in building a city that would eventually benefit them. Unfortunately, in the years past, this vision has turned into a mere fantasy.

According to Akon, the project received multiple delays and setbacks, especially with the Covid Constrivtions. This raised suspicions as he announced and claimed the construction land in 2020 when Covid levels were still at an all-time high. “We’re trying to get the city built as fast as possible”, he stated. He added that he has a lease on the land for the next 50 years. Akon still expects to retire in Akon City and is still ambitious about our project. Unfortunately, ambitions without actions are just dreams.

Many even questioned Akon where he was acquiring the estimated $6 billion. The celebrity singer is only worth $60-80 million, a shy penny compared to the estimated amount. In his defence, Akon stated that his team has an international consortium to fund it with private investments.

The current value of Akoin is $0.01. The very financial infrastructure of the city is in chaos as the crypto ecosystem is steadily failing. Africa’s ecosystem still offers a variety of opportunities for blockchain technology and web 3. Unfortunately for crypto, that window of opportunity is steadily narrowing.

Despite all the “delays”, Aon city has experienced, Senegal still stands strong with Akon’s vision. The legal tender in Senegal, CFR Franc, has advocated for the city. This is despite the various negative opinions of running a city on cryptocurrency. Akon has reassured Senegal and the entire African ecosystem that Akon City is not a fleeting dream. The multiple setbacks were a cause of his poor decisions.

He stated that he should have established some foundation for the projects before announcing it. Akon City is still a project that will bring Senegal and Africa’s ecosystem to the limelight. The crypto industry already recognizes the strides accomplished by Africa. Akoin and Akon City need to improve in various aspects. The facts support this thinking, but what benefit will it bring us as a continent? All we can do is hope for the best but pay attention to the facts.