Blockchain technology has numerous applications. Its decentralized attributes and immutable nature have allowed developers to apply this revolutionary concept in different segments of life. However, did you know that blockchain for farmers also exists? Blockchain in agriculture is a new but thriving concept steadily transforming the industry. From crop insurance for farmers to product quality, there are numerous applications. Blockchain has transformed farming insurance, but has also added various perks.

Although aside from the financial sector, blockchain agriculture offers numerous possibilities for the local African farmer and can solve plenty of the agricultural industry’s problems.

Blockchain in Agriculture and the scale of the agricultural industry

In a nutshell, in every ten individuals in Africa, at least 4 are farmers, which is the minimum scaling point to depict its volume accurately. As such most African countries keep their economy steady through their agriculture.

Agriculture is the dominant export sector for East Africa, accounting for 47% of the total exports. It is also a significant sport for its surrounding region, accounting for at least 14% of exports in Southern Africa and 10% in West Arica. The commodities may vary, but in actuality, the livelihood of several households solely depends on Agriculture; thus, improving it is essential to both the economy and their farmers. 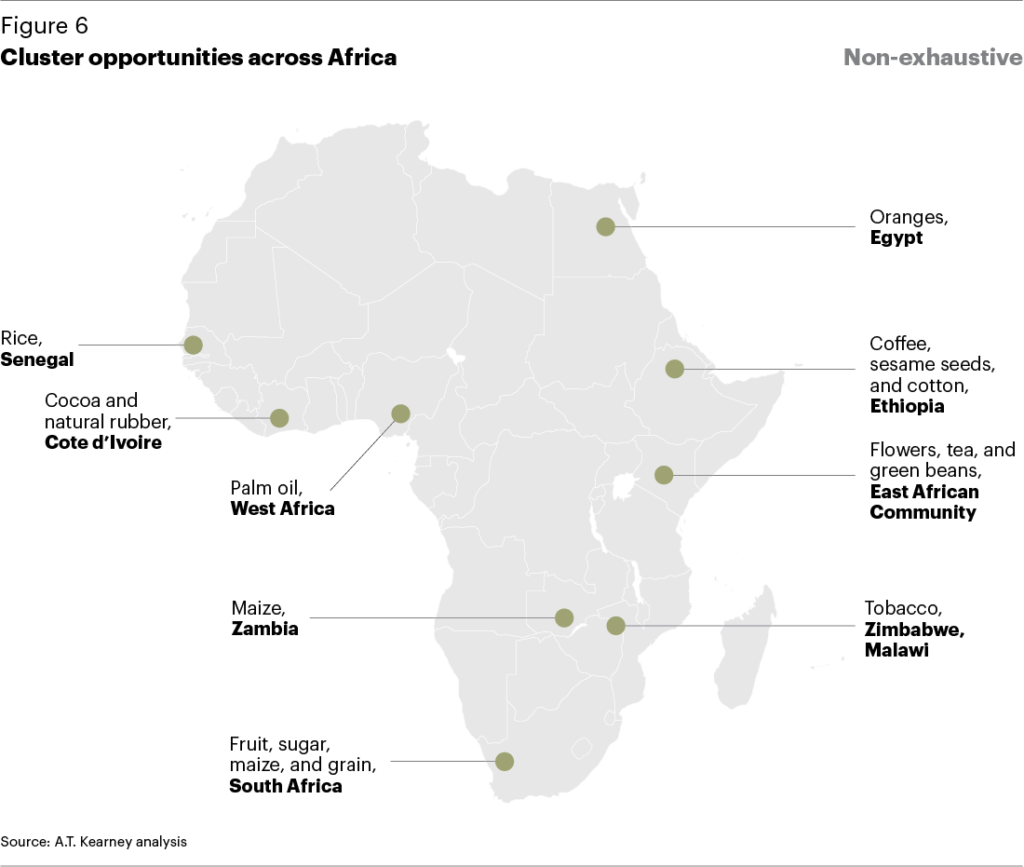 The agriculture industry surrounding Africa is vast, and blockchain for farmers will only boost it.[Photo/DuduTech]

Also, Read Africa: the importance of understanding the crypto market and investment dynamics.

To profit from it, farmers are also required to protect their livelihoods. The weather in Africa does not plague its inhabitants with extreme natural disasters such as hurricanes or hailstorms, but floods and massive droughts are frequent. As such, most financial services came up with farming insurance as an alternative to protecting them.

Crop insurance for farmers worked like a charm, and many individuals and organized farming have safely recovered without much difficulty. Unfortunately, this method can only go so far. Thus, when developers introduced the concept of blockchain in agriculture, it transformed farming insurance and provided alternative solutions for farming insurance.

Potential of blockchain in agriculture

Initially, many were sceptical about this new concept of “blockchain in agriculture”, especially since both aspects were in different dimensions of life. Blockchain technology allows peer-to-peer transactions to take place transparently without the need for intermediary parties like banks.

Its concept was plausible for crop insurance for farmers, but aside from that, only a few connected the dots between the two. Unfortunately, this is merely one side of the coin. Due to blockchain’s immutable nature tracing and mapping became more accessible for developers.

Developers can apply this nature in tracking products in the wide-reaching supply chain. This is especially useful to the agriculture industry, given the complexity and fragile nature of the agri-food system. In Africa, more so local farmers, they often expect at least 10 % of their total crop produce will perish during its transportation.

This appears as a minor figure until you realize on a broad scale, this is at least a few million when calculating a country’s total supply. Blockchain in agriculture provides a solution to food quality and safety tissues, a significant concern for consumers and governments. Would you even like to eat food whose ingredients have gone wrong?

Also, Read Ethereum mining, a beginner’s guide to getting started.

The transparency of blockchain also allows farmers to benefit directly from their hard work. Blockchain technology will record all parties in farming insurance and product buying and selling. Every reliable data of the farming process are precious to develop data-driven facilities and establish appropriate crop insurance for farmers making it more intelligent and less vulnerable to unforeseen but expected hurdles.

Blockchain in Agriculture applications and use cases

Blockchain has numerous functionalities and just as many in agriculture. Here is a look at how blockchain for farmers has transformed the agricultural industry.

Blockchain in agriculture has numerous applications aside from farming insurance. It can expand the agriculture industry exponentially.[Photo/Towards-Analytics]

Africa is a continent blessed with natural resources. Mother nature is abundant within the continent and just as ruthless. Farmers, aside from herders, suffer tremendous losses due to natural calamities such as floods or drought. This directly challenges food security; thus, the need for livestock ad crop insurance for farmers was a mandatory step for any country participating in the agriculture industry.

Traditional farming insurance was an organized tool to manage any damages acquired from weather calamities. The primary steps required the farmers to pay an insurance premium before the cropping cycle begins. They then receive a payout whenever they experience a loss on their farm.

In Africa, however, there is a typical “belief “ that insurance companies are mainly fraudulent. It primarily claims to assist the farmers but ends up fighting them when you desperately require farming insurance payout. As such, its sector did not receive many clients, which was a significant demerit. This lack of participation and the limited availability of farming insurance birthed the concept of blockchain-based crop insurance for farmers.

This was the first iteration of blockchain for farmers, as the native application of blockchain revolves around the financial sector. Despite this, it significantly improved. The new diverse payment methods for farming insurance ensure that farmers in need of cash readily receive it.

Etherisc initiated its blockchain crop insurance for farmers in Kenya and integrated its services with the well-known mobile payment MPESA. In addition, the concept of blockchain farming insurance made it possible to complete insurance coverage without any deductibles.

This empowers farmers even more, reinstituting their faith in the insurance sector. Developers can utilize blockchain smart contracts to create small index insurance contracts where payouts are not triggered by the loss but by a measurable index. This can include weather patterns to estimate the likelihood of a loss before it happens. We will discuss the concept behind it in a later article.

Crop insurance for farmers is merely one application of blockchain for farmers.[Photo/BlockchainX]

As previously mentioned, tracking the food supply chain is a cumbersome endeavour utilizing Web2 capabilities. The agriculture industry has suffered countless times due to inadequate or inaccurate tracking of its supply chain. Farmers now doubt the credibility of the supply chain.

Instantly they expect to lose 10% to 20% of their entire crop produce before it reaches the market. Blockchain for farmers, however, has changed this fact for the better. When merged with the supply chain, blockchain technology can track the entire process, indicating a recording of each checkpoint.

This creates a sense of trust and transparency, preventing food fraud, and it also helps to identify where the losses occur during the process. In addition, blockchain technology can incorporate IoT sensors to generate data related to the crop sown in the field.

This creates an efficient database that is useable in identifying the best method of transport within the Supply Chain. It also assists in tracking down the process to the Whole Salers and Retailers, ensuring that no fraud occurs between the farmer and any entity within the supply chain.

With Web2 technology, farmers gained a sense of luxury as the focus could predict the weather but, unfortunately, not as accurately. Different crops have different optimal conditions, and if not met to some degree, they result in losses. Blockchain for farmers has offered the option of traceability and transparency.

This occurs through the use of smart agriculture. It combines the agriculture industry, Blockchain technology, and IoT devices to process data collected accurately. Blockchain in agriculture enables farmers to understand the crop’s behaviour through IoT devices.

Weather stations can provide crucial data to blockchain devices for processing to understand the various elements conducive to growing crops. This process will be transparent, allowing the farmers to participate as well. As such, they can make informed decisions related t farming. In addition, this process also allows farmers to acquire blockchain farming insurance in advance, allowing them to predict future weather crises.

Blockchain for farmers is still an upcoming concept, but it is applicable. If we can attain proper crop insurance for farmers, provide a clear road map of the supply chain and have the ability to predict whether the agricultural industry will transform significantly. Blockchain has vast potential aside from farming insurance, and by combining its unique traits, we have yet another aspect that propels Africa aside from cryptocurrency.