Home » The seven most important technologies driving the metaverse
News

The seven most important technologies driving the metaverse

The metaverse has seven major technologies driving its realization

As more businesses move their offices online for remote working, we may see metaverse-related employment advertised.

Neal Stephenson conceived the concept of a metaverse in 1992. In his science fiction book Snow Crash, Stephenson wrote about a universe where human beings could utilize digital avatars to explore and get away from the real world. Years later, big tech organizations have started creating iterations of a futuristic metaverse.

Read: Blockchain and the metaverse: A symbiotic relationship

The idea of the metaverse is an online 3D digital universe containing virtual land and items. Imagine working remotely, visiting virtual museums to see the latest artworks, or attending a virtual performance with fellow rock band fans, all from the comfort of one’s own home.
Axie Infinity, The Sandbox, and Decentraland have previously used metaverse features to bring many facets of modern life into online realms. The metaverse, on the other hand, is still in the pipeline. Nobody knows whether there will be a single all-encompassing metaverse or several metaverses across which people can travel.
The concept will likely grow as it evolves beyond social media and video game platforms. Telework, decentralized administration, and digital identification are just a few potential functions supported by the metaverse. Metaverse can also become more multidimensional with linked VR headsets and glasses, allowing users to roam around and experience 3D environments.

The most recent metaverse developments

The metaverse became the famous catchphrase after Facebook changed its name to Meta in October 2021. To prepare for Facebook’s rebranding, the social media giant invested $10 billion in a new reality lab branch by 2021. The plan is to create metaverse content, software, and AR and VR devices, which CEO Mark Zuckerberg believes will be as common in the future as smartphones.
The COVID-19 epidemic has also heightened interest in creating metaverses. As more individuals work remotely, there is a greater desire for more engaging methods to interact with others. Virtual 3D places that allow employees to join meetings, catch up, and cooperate are becoming more popular. One example is the Microsoft Mesh, which launched in November 2021. It includes immersive environments where users may mingle and communicate using their avatars, making remote team meetings more engaging and enjoyable.
Some online games are also adopting the metaverse. Pokémon Go, an augmented reality mobile game, was one the earliest to capitalize on the concept, enabling players to pursue virtual Pokémons in the ordinary world using a mobile application. Another famous game, Fortnite, has extended its offering to include other activities within its digital environment, such as staging brand concerts and events.
In addition to social networking and game platforms, technology firms such as Nvidia have created new prospects in virtual worlds. Nvidia Omniverse is an open platform connecting 3D places into a shared universe, allowing engineers, designers, and creators to collaborate virtually. Virtual collaboration finds value in a variety of sectors. The BMW Group, for example, is utilizing the Omniverse to save production time and increase product quality through intelligent manufacturing. The metaverse has developed to become the new favorite buzzword. [Photo/finextra]

The Internet of Things (IoT) idea was initially presented in 1999. IoT is a framework that links everything within the physical world to the Internet via devices and sensors. After an internet connection, these gadgets will have a distinct identification and the capacity to transmit and receive information automatically. IoT connects thermostats, voice-activated speakers, medical gadgets, and other devices to various data sources.
One use of IoT on the metaverse is data collection and distribution from the physical world. The usage improves the precision of the digital representations. For example, IoT data streams might alter the behaviour of some metaverse objects based on current weather or other variables.
IoT implementation may connect the 3D environment to many real-world devices. The connection permits the building of real-time metaverse simulations. IoT might employ AI and machine learning to handle better the data it collects to enhance the metaverse environment.

Artificial intelligence (AI) has been extensively used in daily life, including corporate strategic planning, decision-making process, facial recognition, faster computing, and more. Recently, AI specialists have begun researching the prospects of using AI to create immersive metaverses.
AI can handle massive amounts of data at breakneck speed. When combined with machine learning techniques, AI algorithms may learn from past iterations, considering historical data to provide unique outputs and insights.
AI may get deployed to non-player characters (NPCs) in many settings inside the metaverse. NPCs appear in practically every game; they are a component of the gaming environment that reacts and responds to player activities. NPCs can be placed in 3D environments to promote lifelike dialogues with users or complete other jobs using AI’s processing skills. Unlike a human user, an AI NPC may run independently and be utilized by millions of users simultaneously. It can also work in a variety of languages.
The production of metaverse avatars is another possible use for AI. AI engines may evaluate 2D photos or 3D scans to create more lifelike and accurate avatars. AI may also be used to develop new facial expressions, haircuts, outfits, and characteristics to augment the digital humans we build to make the process more dynamic.

While 3D reconstruction is not new, its use has increased during the epidemic, particularly in the real estate business, where lockdowns prohibited potential purchasers from seeing houses in person. As a result, several agencies have turned to 3D reconstruction technology to provide virtual property tours. Buyers might look around possible new homes from anywhere and make purchases without even stepping foot inside, similar to the metaverse we envisaged.
One of the metaverse’s problems is to build a digital environment that seems as genuine as feasible. It is possible to construct realistic and natural-looking settings using 3D reconstruction. Humans can bring their environment online by producing accurate 3D photorealistic representations of buildings, actual locations, and things using sophisticated 3D cameras. The 3D spatial data and 4K HD images then get transmitted to computers, which process them and create a virtual counterpart in the metaverse for people to explore. These virtual duplicates of real-world items are also known as digital twins.

Augmented reality (AR) and virtual reality (VR) can provide us with a 3D experience that is immersive and entertaining. These are our portals into the virtual world. But what is the distinction between AR and VR?
AR transforms the natural environment by incorporating digital visual elements and characters. It’s less intimidating than VR and can work with a camera on any smartphone or digital device. AR apps allow users to observe their environment with dynamic digital images, comparable to the mobile game Pokémon GO. Gamers can see Pokémon in the real world when they open their phones’ cameras.
VR functions differently. It creates a computer-generated virtual environment, similar to the metaverse idea. Users may explore it using virtual reality goggles, gloves, and sensors.
The way AR and VR function demonstrates an early metaverse concept. VR is already transforming the digital environment by including fictitious visual material. VR, as its technology matures, has the potential to broaden the metaverse experience to include physical simulations using VR equipment. Users will be able to sense, hear, and engage with others from all around the world. Given the buzz around the metaverse, one may expect more metaverse firms to invest in developing AR and VR technology soon. 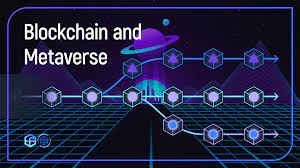 While blockchain and the metaverse have unique traits, they work together harmoniously to open up a world of new possibilities. [Photo/blockbuild.africa]

Blockchain technology enables decentralized and verifiable digital proof of ownership, electronic collectibility, asset transfer, governance, accessibility, and interoperability. Cryptocurrencies allow users to exchange value while working and socializing in the 3D digital world.
Crypto, for example, can be used to purchase virtual lands in Decentraland. Players can use the game’s cryptocurrency MANA to buy 16×16 meter land parcels in the form of non-fungible tokens (NFTs). The ownership of these virtual territories may be established and protected with the use of blockchain technology.
In the future, crypto might incentivize people to work in the metaverse. As more businesses move their offices online for remote working, we may see metaverse-related employment advertised.

The challenges associated with the metaverse

The metaverse is currently in its formative phases. Identity identification and privacy control are two examples of problems. In the actual world, it is not always difficult to recognize someone. However, when individuals move about the virtual world in their avatars, it will be impossible to determine or verify who the other person is. Malicious actors or even bots, for example, may enter the metaverse as someone else. They might then exploit this to harm their reputation or defraud others.
Another issue is privacy. To provide an immersive experience, the metaverse relies on AR and VR technologies. These camera-equipped devices with unique IDs may potentially result in unwanted breaches of personal information.

Whereas the metaverse is still in its early stages, several businesses are actively investigating its possibilities. Decentraland and The Sandbox are significant efforts in the crypto sector, but huge businesses like Microsoft, Nvidia, and Facebook are also actively participating. As AR, VR, and AI technology improve, we may expect to see fascinating new features in these limitless virtual worlds.